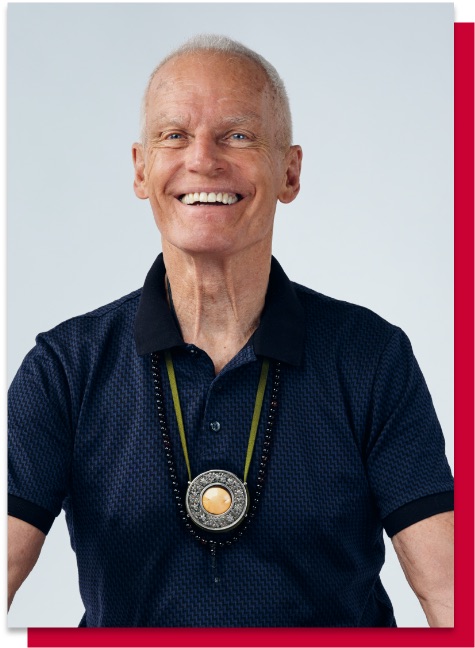 Lama Ole Nydahl’s synthesis of modern style and ancient wisdom has demystified Buddhist teachings for thousands of students around the world. His approach is joyful and uncompromising. He is not always politically correct, but his motivation is clearly always for the benefit of others.

He is unconventional but at the same time one of the most effective and influential Western teachers to emerge from the Karma Kagyu lineage of Tibetan Buddhism.

While on their honeymoon in 1968, Ole and his wife Hannah (1946-2007) met the 16th Karmapa, one of the greatest Buddhist Masters of the 20th century. Through the Karmapa’s influence, the young couple ended their wild ways, and were among his first western students.After completing a rigorous three years of training in the Himalayas under the instruction of the 16th Karmapa and other realised teachers, the Karmapa asked Lama Ole Nydahl and his wife Hannah to travel and help bring Vajrayana (which translates as Diamond Way) Buddhist teachings to the West. With an increasing band of friends and helpers, they have travelled constantly since 1972 sharing the timeless Buddhist teachings on the nature of mind with idealistic Westerners.
Lama Ole has founded over 600 lay (non-monastic) Diamond Way centres around the world, and 11 centres in Australia. Participants at these centres learn the Buddha’s teachings and practice meditations that are completely relevant to an active Western lifestyle.

Born in 1941, Lama Ole Nydahl is a Danish Lama (Buddhist teacher) who rides motorbikes and skydives in his spare time. Lama Ole’s dynamic style is influenced by a keen interest in contemporary developments in science and world events, a practical sensibility and most importantly, a wish that the profound Buddhist path of the Diamond Way is made accessible to intelligent and critical western minds.

He delivers authentic Buddhist teachings with humour and a common-sense approach that belie the depth of the transmission he represents – it sounds so simple because it is, yet his words will resonate long after the ‘meeting of minds’ occurs.

Lama Ole also holds the transmission for a unique Vajrayana practice called Phowa (conscious dying). Since 1987 he has taught this profound practice to over 50,000 people in retreats around the world.
Lama Ole has given numerous print, television and radio interviews and is the author of several books, which have been translated into many languages.